In a remarkable pre-print, Knowles and co-workers have reported a catalytic deracemization reaction driven by light. In simplified form:

Typical catalytic enantioselective reactions do not face these problems because the products are lower in both potential and free energy than the starting materials. In catalytic deracemization reactions, it is necessary to couple the deracemization process, which is necessarily neutral in potential energy and uphill in free energy, to a downhill process. Previous efforts have accomplished this by coupling to chemical redox or photochemical energy transfer.

In the Knowles study, light was used to drive continuously the system away from equilibrium. While a stereoselective ablation process preferentially destroys one enantiomer, a stereoselective regeneration process continuously favors the formation of the other enantiomer. Below, we examine the kinetics behind this process and consider the question of how ablation and regeneration work together to achieve high enantioselectivity.

How does the transformation work? Starting from one enantiomer of substrate:

The kinetic scheme is: 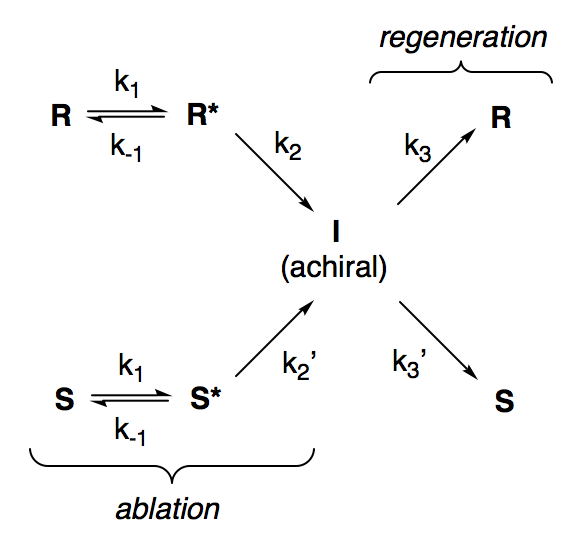 Presumably, R and S are the only observable substrate species in this reaction, meaning that R*, S*, and I are reactive intermediates that are being formed and destroyed at equal rates. Applying this steady-state approximation to R:

The left-hand-side is simply the first-order rate for generating R from I. The right-hand-side considers the R to R* to I sequence as a unit. That is, R is destroyed by becoming I, and the rate for this is given by the Michaelis-Menten equation.

Similarly, for S, we have:

We can then divide these two equations to determine the steady state ratio of R to S: 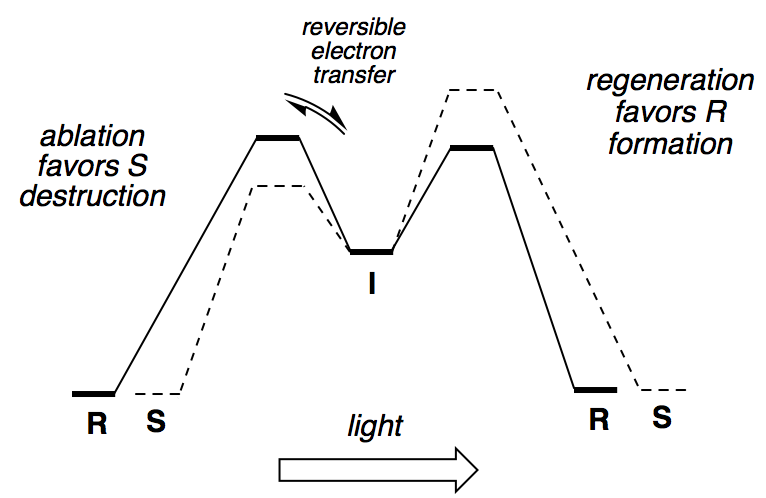 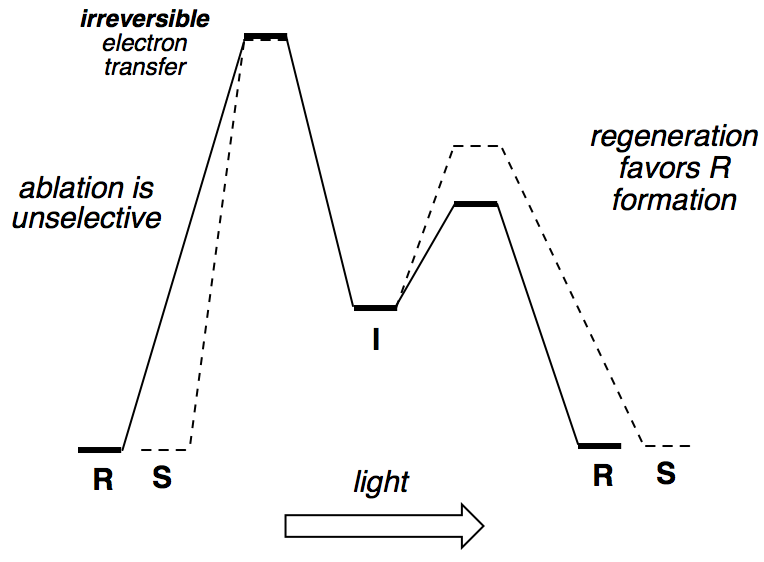 This is remarkable work. By engineering a system in which stereoablation and regeneration are under the independent control of two different catalysts, the overall selectivity is multiplicative. This “independent catalysis” situation is not only very rare in asymmetric catalysis, but extremely desirable. This is because the optimal catalyst for one fundamental step may be very different from the optimal catalyst for another step. Furthermore, it seems likely that the strategy described here will be applicable to other systems. For example, in more complex systems, where the intermediate carbon-centered radical may only be locally achiral, an analgous pseudoablation/regeneration approach should also result in deracemization. As further applications of this concept to other systems emerge, the implications for asymmetric catalysis will likely be profound.